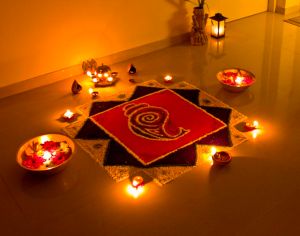 I used the three terms used for Diwali in India viz Diwali, Devali, Deepavali in Pubmed using the OR operator. I also ran up a separate search on the related festival of dhanteras. For those unaware of dhanteras , it is the custom of buying any precious metal as a sign of good luck on the thirteenth (teras) lunar day in the Hindu Calendar of Ashwin. (Men however now call it a “collaborative collusion between gold merchants with their wife to coerce them to buy jewellery”)

The first search retrieved 16 results. Further I used the AND operator to identify the studies related to human participants. This led to identification of just 11 studies. I threw out the studied which were primarily concerned with environmental assessments rather than direct effects of humans (Read it as it contained terms which I had absolutely no idea about). That left me with just 5 studies to analyse for diwali. The Dhanteras search did not retrieve any studies.

Before I go into further analyses of the 5 studies let me share a particularly interesting fact .One of these five studies was from Singapore titled “A retrospective case series study of Deepavali fire walkers in Singapore.” – which means that 20% of the studies measuring the direct impact of diwali -the largest festival of India was Non-Indian . This gives me the liberty to conclude that Diwali is quite popular outside India too. (Its now officially celebrated in the White House too!!!)

Since the Dhanteras study did not yield any result it is recommended that Dhanteras be included in the WHO List of Neglected Disease and priority funding be provided for research on dhanteras and its ill effects on health, if any.

The study on ocular injuries on the 2008 Diwali week has reported 51 incidents and 40 of them were males. Thirty-one patients were less than 20 years of age.These differences in  gender and demography can be explained by the fact that young  Indian men get distracted by the beautiful colourful dresses women wear. Women on the other hand are more careful and do not pay attention to men owing to the huge demand-supply gap as a result of the falling sex ratio. It is recommended that urgent measures be taken by authorities to prevent female foeticide and thereby improve the sex ratio to decrease the ocular injury related morbidity seen in men during Diwali. The fact that only few old men were distracted enough by women to get injured either point to the loyalty of older Indian men or the fact that they have had already learned tactics to “watch and not get injured in the eye”. This should be further researched on by social scientists to suggest adequate preventive measures.

I further reaffirm my conclusions in the last paragraph by the fact that the data showed that a majority of these patients were “onlookers” (In other studies on cracker related injury from USA Greece and Persia the majority of victims are active firework igniters) and that “none of the firecracker victims reported using any protective eye wear at the time of injury”-clearly showing their intention to “look around ” . Similar results were found in another study on ocular injuries in Diwali from 1997 to 1999.Further analyses of the types of ocular injury and their management is beyond the scope of the study. It is also recommended that Indian women stop looking beautiful and  they all dress dull and non-glam in Diwali.

The other very large scale retrospective study which identified 1372 patients over 3 day periods around Diwali from 2002 and 2012 wanted to invertigate the epidemiology and impact of legislation in Delhi which had been implemented in 2005. The researchers found what was obvious

It is  recommend that in the future no research be carried on any field to measure impact of legislations -given that  it is common sense knowledge that does not merit any scientific enquiry. However the study is useful in the sense that it provides further evidence to support the “men-get distracted and injured” theory. In this study too  “73.02% of the victims were 5–30 years old.” with a male preponderance of 84.8% .

Speaking of legislations it might be worthwhile mentioning that a study found that device failure was the cause of injury in 35% of those injured.

That analyses of  the remaining one study : Kiran U, Choudhury M, Saxena N. Penetrating cardiac injury: a dreaded outcome of diwali (fire work) festival. J Assoc Physicians India. 2000 Apr;48(4):458. was not done since it was a case report involving just one patient. However it highlights the important need of keeping your heart in “safe hands”during Diwali.

They say there are lies , damn lies and statistics . Now you know. All this was in humour . Be Safe and have a  Happy Diwali .

Image Courtesy : All Images from Wikipedia and are under CCL

19 thoughts on “A Non Systematic Review on Diwali”